The long awaited (and once almost unlikely) dream of running Flash encoded videos on iPhone and iPad ‘officially’ now appears to be getting real close to becoming a reality as Apple is ready to approve the first ever app on the App Store which allows playback of Flash videos. Skyfire mobile browser, which which will be available for download at 9 a.m. ET according to CNNMoney.com is the first app of its kind capable of playing Flash video while adhering to all Apple’s guidelines regarding HTML5 open-video standards on its iOS based devices. 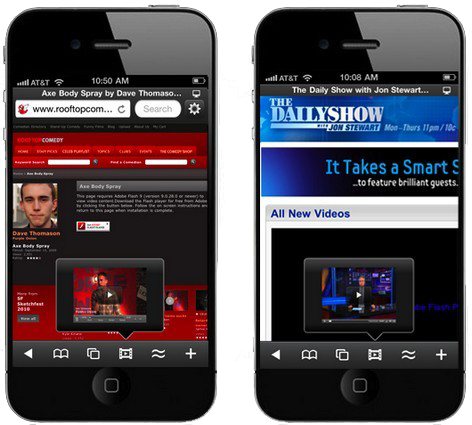 According to Adobe, about 75% of video content over the web is encoded in Flash which, according to Apple CEO Steve Jobs, is not stable enough to run on the iOS while draining the iPhone’s battery life way too fast. “We will attack those pesky blue Flash error messages” says Jeffrey Glueck, the CEO of Skyfire mobile browser.

“To get around Apple’s restriction, Skyfire came up with an innovative solution: When users click on a page that contains Flash video, Skyfire’s servers download, render and translate the video into HTML5, which is a Web standard that iOS devices support. Skyfire then displays a thumbnail that users can click on to stream the video from its servers.”

It is not yet clear as to how much flash content will be available for iOS via Skyfire but it is certain that on some websites like Hulu, Skyfire won’t have an effect which blocks the app from downloading its videos. Also Skyfire won’t be able to translate games or other non-video Flash content but still it is estimated that the number of websites and videos that Skyfire will open up to iPhone, iPad and iPod Touch users is in the “millions” according to CEO of Skyfire. Also for secure websites like banking, Skyfire turns of its engine to preserve privacy.

“Skyfire for iOS isn’t a standalone application, but rather a tool that works on top of Apple’s Safari Web browser. As a result, the company said the app received a rather rigorous review from Apple, but it was approved in less than two months. Apple did not return a request for comment on why it approved Skyfire for its App Store.”

So, what do you think about this one folks? Share your thoughts with us in the comments section below!

Stay tuned to our website and keep following us on Twitterand Facebookfor latest App updates for your iPhone and iPod touch!