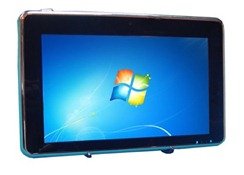 A company in China claims that its iPad knockoff is actually the original design which has been copied by Apple. The P88 (The Chinese tablet’s name) has been in the Chinese market for about six months. You can recognize it easily, it looks a lot like a big iPhone.

Xiaolong Wu, president of the manufacturing company, was interviewed by a Spanish newspaper El Mundo. He claims that if the iPad comes to China, “We won’t have any choice but to report them because it will affect our sales.”, the charge being a copyright infringement.

Wu says that Apple not only copied the concept of a multi-touch tablet, but it also appears to have the same design of the casing and the screen bezel.

Wu says that the iPad and P88, are completely identical. But the specs like to tell differently. It has a 10.2 inch screen, it doesn’t use multi-touch technology, as it uses resistive touch technology, the P88 uses a hard-drive of 250GB, has a 1.3MP webcam, and an Intel 945GSE chipset, a gig of RAM, and an Ethernet port. Its battery life is as much as 1.5 hours.

I think the whole story is suspicious, and ridiculous. I think it’s a cheap play for publicity.

Now for a Chinese product, you would expect something cheap, it really costs $525. Why would anyone buy the P88 if most of it’s features, if not all, are bad?