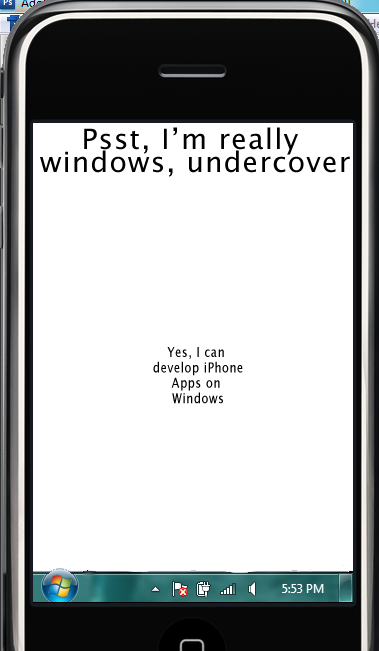 DragonFireSDK has managed to release what seems to be an extension for Microsoft Visual C++, which is really an SDK for developing iPhone apps on Windows. Yes, what you just read is completely true, and 100% working!

The picture above is actually a snapshot of the iPhone emulator running on windows, which was taken by me. When I first read about DragonFireSDK, I though it would be just a very weak tool for creating Apps for the iPhone, but it actually is good. It does what it says.

Now, you don’t use objective-C to code the app, you’ll use C++ for that cause, which is considered a more popular programming language then objective-C. But all this iPhone developing goodness has it’s downs: You can’t publish the app on your own, you will need to send it to DragonFireSDK so that the team converts it, and publishes it under their developer account.

The down part? First, you will have to send it to them, which means, they can alter the code in any way they would like, without you knowing. Next, if you are planning on making it a paid app, forget about that, because it won’t be under your developer account, but will be under there’s, so unless they make you the beneficiary, they will get all the revenue.

What’s the cost of all this Windows developing? DragonFireSDK is still in beta stages, and you can apply for a beta tester rank, and they will provide the SDK completely free, but when it reaches the full version, you will have to pay $49.99 for the SDK.

You shouldn’t have any fears using it, it actually works well on windows, and it’s still in beta!