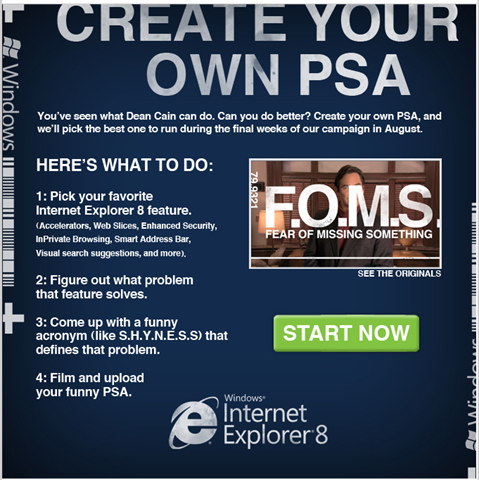 After the disgusting projectile vomiting ad, Microsoft have started a campaign for users to create their own PSA ( Public Service Ads ) for Internet Explorer 8. The ads should be funny and teach how to solve a problem using one of the new feature in Internet Explorer 8. Coming up with a funny acronym like ( S.H.Y.N.E.S.S ) is a part of the deal. The best ones will be picked to run during the final weeks of the campaign in August and also receive a $2,500 scholarship.

Any ad would be a PSA after the vomit ad incident which has now been taken down. Just don’t use the acronym V.O.M.I.T

Take part in the campaign here. There are already 9 entries and 25 more days to go. Good luck!