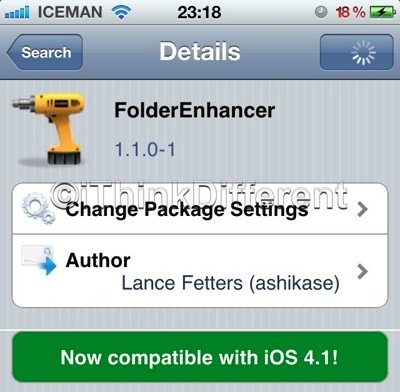 One of my personal favorite Cydia tweaks i.e FolderEnhancer which adds tons of awesome features to native folders of iOS4, has just been updated to v1.1 and now fully supports iOS 4.1. Normally priced in Cydia store at $1.99 is currently available for mere $0.99 until the end of October to all existing customers of CategoriesSB. This definitely is a must-have Cydia tweak for all those with a jailbroken device!

*A future update will include vertical and paged scrolling according to the author.

You can watch FolderEnhancer in action below:

Stay tuned to our website and keep following us on Twitterand Facebookfor latest Cydia updates for your iPhone and iPod touch!