Windows 7 is already way faster in terms of boot time, responsiveness and performance. And since, Windows 7 is touted as a will-be-able-to-run great on netbooks OS, I checked the space usage of both operating systems. 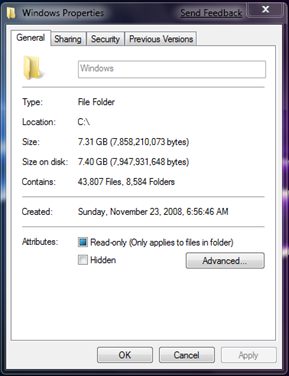 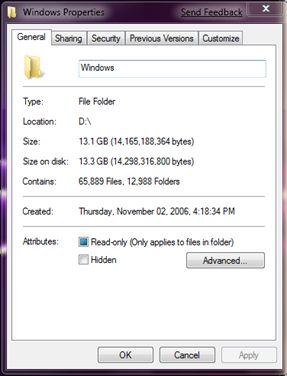 The above images show the size of the Windows folders of Windows 7 on the left, and Windows Vista on the right. Both are fresh installations, with all drivers installed. The space usage is as follows:

The program files folder in Windows 7 has reduced considerably in size as well. I had installed Windows Live Wave 3 applications, Skype and Witty, a Twitter app. The program folder weighs in at 688 MB with all these programs installed. 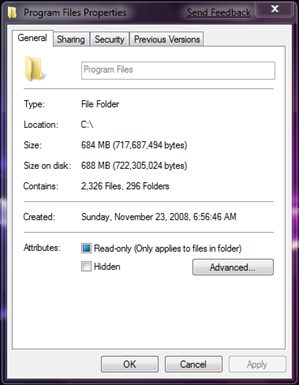 Windows 7 has shed a lot of fat, with the removal of preinstalled applications. The Windows folder has also shed a lot of weight, as well as approximately 22,000 files. Not bad for a pre-beta. If this, along with the performance improvements and bug removal, keeps going on, we might have a winner on our hands.

There’s no doubt about the fact that Vista has been the biggest resource hog not only in terms of disk space usage but also in the manner which it consumes memory. According to a blog post by Microsoft, the more Windows/applications Vista had to draw on the screen, the more memory usage consumption used to grow for that. On the other hand, the improvements in Windows 7 are such that, the memory usage doesn’t grow exponentially for the number of Windows drawing on the screen. Whether this is due to the driver model or due to other issues, one has to wonder why Microsoft didn’t take this into account when engineering Vista.

Vista has been a huge eye opener for Microsoft and the effects have been seen throughout all their divisions. They need to realize that they can’t sleep on stuff, delay their products or over promise and under deliver. Consumers expect the best treatment and to be given what they’re promised. And no user wants a resource hog that just increase the hardware requirements but doesn’t provide the best value for it.

Windows 7 is bound to change all this as it runs much better on the same hardware than how Vista performs. Here’s looking to a leaner, meaner operating system in the form of Windows 7!