Google’s Docs, Sheets, and Slides apps have been updated with support for iPad’s multitasking features, Split View, and Slide Over. All apps have also received performance improvements and bug fixes, with Docs getting some additional for inserting images and page breaks. 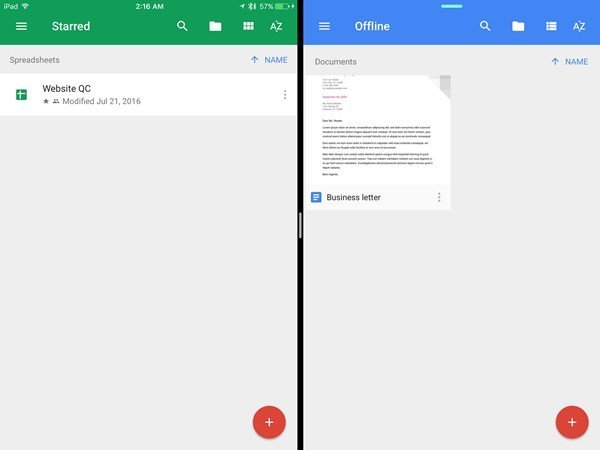 Slide Over allows users to quickly access another app for a brief moment by dragging from the right side for their iPad display. Users can go back to their current app by sliding the app away. This functionality is ideal for quick glances at Facebook or Twitter while working on a project, or when writing an assignment, users can have a quick peak at reference documents. Slide Over works iPad mini 2 and later, iPad Air and later, and iPad Pro.

Split View gives users more power by letting them open two apps side-by-side. Users have the freedom to decide which app gets more screen space, by adjusting their size. This feature only works on iPad Air 2, iPad mini 4 and iPad Pro.

You can read more about other iOS 9 features, including Split View, Slide Over and 3D Touch.

In addition, when working in Google Doc, users will also be able to insert images from their photos, art clips or from the web. They can also organize their documents by inserting page breaks.

Google has taken their sweet time to update most their productivity apps with all of iOS 9’s features, especially when iOS 10 is on the verge of release. In comparison, Microsoft’s Office apps were updated around 11 months back and were used to showcase iPad Pro’s multitasking features during its launch event. Apple updated its own Pages, Numbers, and Keynote apps shortly after with iOS 9 multitasking features.

The updates are available in the App Store.