Microsoft’s Office apps were one of the highlighted productivity apps for Apple’s new iPad Pro. During Apple’s September 9 event, Microsoft demonstrated Word, Excel, PowerPoint and Outlook, on stage, to show how it works with iPad Pro’s new features which include split screen multitasking, slide over and Apple Pencil. 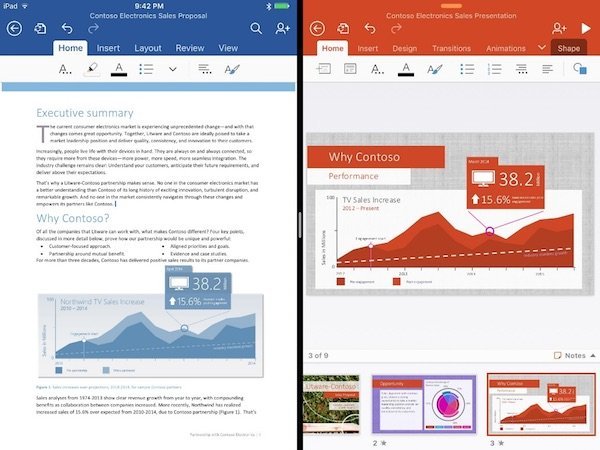 Microsoft had released Office apps for iOS last year. This included Word, Excel and PowerPoint, whereas OneNote had already been available on the platform. Outlook was later added via acquisition of an app called Accompli by Microsoft. Together, these apps form the Office productivity suite and are the best versions of the apps on any platform after Windows. Document rendering and editing, along with cloud syncing works very well and Microsoft is always quick to adapt the latest iOS features.

With iPad Pro, Apple welcomed Microsoft representatives on stage by announcing that they are the developers of the best productivity apps. Apple chose Office apps as the first ones to display the productivity benefits of the new larger iPad, instead of their own iWork apps.

The new Office apps on iPad Pro will take full advantage of iOS 9 and the larger screen. Supported features include:

Office apps updates will be available in the App Store when iPad Pro and iOS are available. iOS 9 and WatchOS 2 are  releasing on September 16 so Microsoft might update the apps to support it.

The apps will be downloadable from the App Store from below links.