Microsoft’s Office apps, Word, Excel, and Powerpoint have been updated to support drawing on iPhone. In the latest versions of all three apps, Microsoft has included a new draw tab, which lets users draw, write or highlight documents easily on their iPhone screens using their fingers. On iPad Pro, users can use Apple Pencil to annotate or draw on documents. 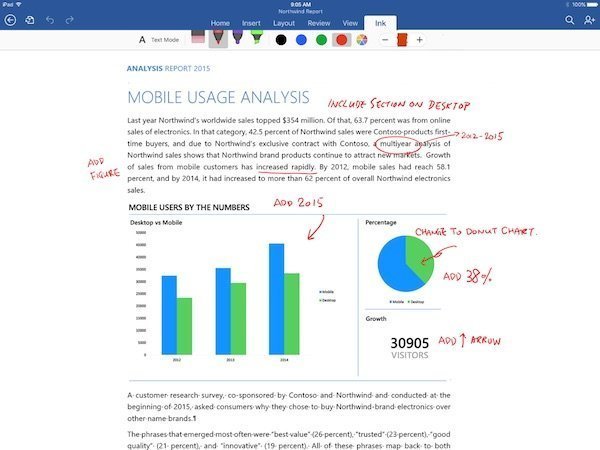 The newly added ‘draw’ tab on iPhone version of Office apps offers annotating and editing tools like pen line, eraser, and highlighter. Users can also set different colors for pen line and highlighters. Furthermore, users can convert hand-drawn shapes into customized shapes.  All of the tools are pressure sensitive when used with Apple Pencil on iPad Pro; meaning that the thickness of highlighter or the pen line and the range of the eraser will be determined by how much pressure users apply on the screen. The harder the users will press on the screen, the thicker the highlight or pen line, and wider  will be the eraser’s range.

The functionality to draw or annotate by finger makes use of Microsoft Office apps easy and convenient for iPhone users. Having said that , the ‘draw’ tab in Word documents is not easily accessible and takes a few clicks to get to. Users can conveniently alter or highlight content on Excel sheets and PowerPoint slides from the palm of their hands.

Previously, Microsoft rolled out inking support all Office apps for iPad Pro with the use of Apple Pencil.

Other updates include the ability to store and access files with Citrix. PowerPoint users can now search for text in their slides from the ribbon menu.

Word, Excel, and PowerPoint are available in the App store for free and require iOS 8.0 or later. The apps are compatible with iPhone, iPad, and iPod Touch. However, iPad Pro users will require an Office 365 subscription to create and edit documents, spreadsheets, and presentations in the respective apps.