Xbox One will be getting a brand new user interface this November. The UI overhaul consists of a faster interface built on Windows 10, backward compatibility with Xbox 360 games, community features, updated OneGuide for TV and video content and much more. 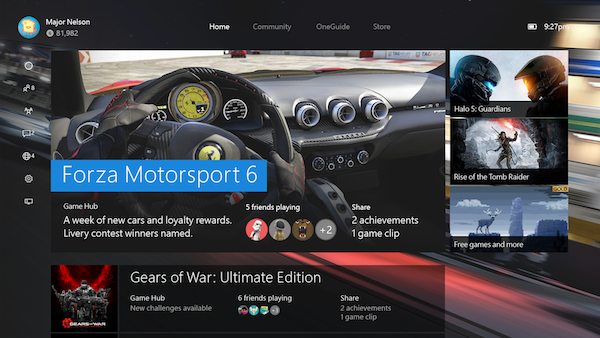 Microsoft will be rolling out the update to select Preview members to start with, before the public release in November. Starting from Preview members who have submitted the most feedback in the past, the release will roll out to more members down the road, with more and more features being added over time.

The reason is to receive feedback, fix bugs and polish the experience before the public release. Preview members will be getting invites via Xbox Live messages. Major Nelson provides more details:

*If you’re a Preview member, you’ll get an invitation sent to you in an Xbox Live message.

*From the invitation, launch the Xbox Preview Dashboard and select the registration option.

*You can then opt-in by selecting “Preview – New Xbox One Experience.”

*If you don’t want to participate in this preview update, you will continue to receive “regular” Preview Program updates going forward. It will not remove you from the Xbox Preview Program altogether.

*Over the next several weeks, new builds will regularly roll out to those who opt in, and our engineering team will work to improve the features and fix any bugs they identify during the preview testing.

Check out the video below of thew new Xbox One Experience in action: