iPad Pro has finally been unveiled by Apple at their September 9 event. The new 12.9″ beast tablet pulls out all the stops and delivers top of the line innovative features which seem inspired by Microsoft’s Surface. But, instead of following the Surface hybrid tablet, iPad Pro goes ahead and beats it in terms of features and functionality. We take a look at the complete list of features, specifications and price for the Apple’s newest tablet. 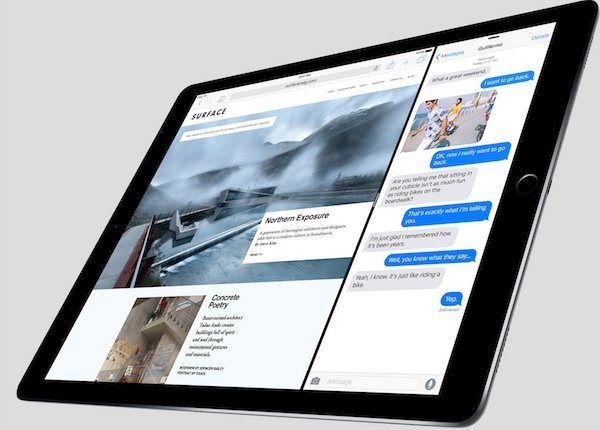 iPad Pro is Apple’s largest display iOS device with the highest resolution display on any iOS device too. If held in landscape mode, the height of the display matches exactly the height of the iPad Air 2 display in portrait mode. The reason behind this is to allow users to run 2 full iPad apps side-by-side for multitasking.

The display has a resolution of 2732 x 2048 pixels and pixel density of 264 pixels per inch and uses much of the tech that Apple uses in powering the iMac 5K display. Such a display requires very powerful internals and Apple has gone full throttle on that front with a 64-bit A9X chip. It is yet to be known as to how many cores or at what clock speed does the new processor run but it is safe to know that it is extremely powerful – 1.9x times than iPad Air 2’s A8X processor to be exact.

Another major feature in terms of hardware is that the iPad Pro has 4 speakers which smartly adjust depending on which orientation it is being used in. So no matter you use it upside down or in portrait or landscape mode, the speakers will automatically adjust to give you proper stereo sound from the right and left channels.

iPad Pro has support for two important accessories. The first is a ‘Smart Keyboard’ that also becomes a kickstand and contains a layout and keys equivalent to the new 12″ MacBook. The keyboard connects to iPad Pro via a new Smart Connector which powers it without the need of any wired connection. Once connected, iPad Pro automatically recognizes it and shows a shortcuts bar on the display. Apple makes the best keyboards in the industry so keeping that in mind, this should be a good one too.

The second accessory, which defies Steve Job’s famous saying “who needs a stylus” is the  Apple Pencil. It works with the iPad Pro display and can be used for writing, drawing and precise interactions thanks to its extremely low latency hardware + software combination and support for different types of usage: straight drawing, pressure sensitivity or tilt. It has a lot of smartness built in to detect all these usage scenarios in real time. The Pencil also charges using the lightning connector on the iPad Pro. Just 15 seconds of charging gives 30 minutes of usage time, while a full charge gives 12 hours of usage. Only if my iPhone could charge for up to 30 minutes in just 15 seconds!

Rest of the features are almost the same as iPad Air 2 – TouchID, Apple Pay, Cameras, Sensors and so on. In terms of OS, iPad Pro is expected to ship with iOS 9.1, of which the first beta was released today. iOS 9.x comes with improved multitasking by allowing apps to run side by side, a new slide-over feature, picture-in-picture video playback, improvements to Mail, Notes, and Safari amongst other features.

There are 3 colors available for the iPad Pro: silver, gold and space gray.

Apple has tried to price the iPad Pro competitively against the Surface. Here is the rundown of price/model breakdown:

16GB is missing from the range and that is fine but it’s strange to see that Apple did not choose to offer a 64GB model. Perhaps around $850, that would have been a good offer. As a 64GB iPhone 6 Plus user, I doubt even 32GB is good enough for artistic or professional usage – the demographic that iPad Pro is primarily targeted at.