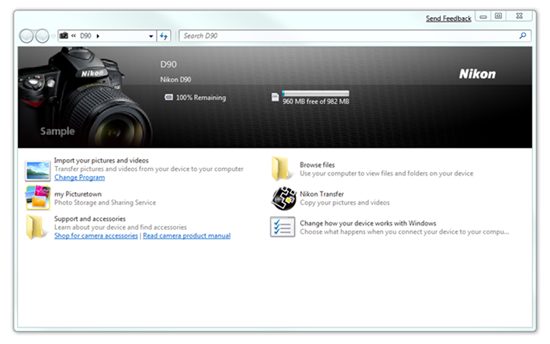 Windows 7 has a very interesting new feature called Device Stage. With a compatible device, it will give you access to all the tasks along with a photo realistic image of it. It’ll also show you information such as battery life, storage capacity and other such information. This is one of the best features of Windows 7 so far, and if every manufacturer implements it, this would really put other Windows competitors to shame, some who don’t even support Blu-ray yet. Why? Because this is a great example of the huge software plus hardware ecosystem that Microsoft is trying to create using Windows 7. Another example of this is how Windows 7 Beta almost detects every hardware by itself and installs the correct drivers or uses Windows Update to download and install them. This kind of ease of use is what pulls some people to Apple products, but Microsoft is aiming to provide it in Windows 7 itself.

The current list of companies that are supporting Device Stage in some of their devices includes Brother, Epson, Cannon, Nokia, HP, Motorola, Lexmark, Sandisk, Sony Ericsson and Sony Walkman. Hopefully, by the time of release, more companies will jump on board to provide more value to users using Device Stage. It might seem like a small feature to have realistic images, quick help links and information available in one place. But once more device manufacturers start using these features, the ones who don’t will seem out of place by their users.

For a better understanding of how Device Stage works, head to the excellent write up by Brandon Le Blanc at the Windows Experience Blog. And for a list of devices that support Device Stage so far, head on to the Microsoft Windows 7 devices list.