This may sound unbelievable but its true. A group of developers and hackers named “pandaelf” has been able to successfully play PlayStation 3 games on an iPad, iPhone and iPod touch. What they’ve actually done is that they connected a USB mouse & keyboard to the PS3 for the controls and a third party capture device which streams video to a PC running a custom build of everyAir (remote desktop client) which picks up gestures to input into the PC which then sends it back to the PS3 via an input interpreter. It all sounds a bit overwhelming but its still far from perfect at the moment 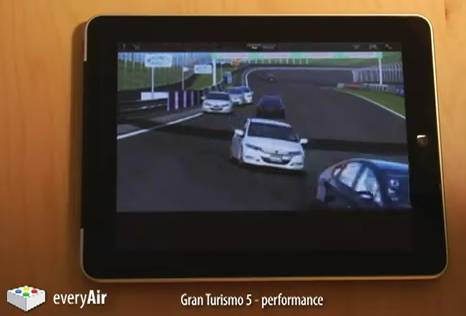 Check out a little Q & A with the hackers and see what they had to say about their latest achievement:

Q: What’s the overall picture for how this works?

A: The trick is to connect a capture device and a USB mouse/keyboard device to the PS3. The capture device sends video data to the PC, and the USB keyboard/mouse sends the button presses. On the PC itself, you run a custom build of everyAir which understands custom gestures and pipes the input to the PC which then sends it to the PS3 via the input interpreter.

Q: What were some of the hurdles?

A: Using one of those USB Keyboard/Mouse devices. For example, Eagle Eye (search for it on Amazon).

Q: How do you get the video signal from the PS3 to the iOS device?

A: We do this by using an off the shelf capture device. The capture device connects to the PC, TV, and to the PS3. The result is that a livestream of the PS3’s video signal ends up on the PC.

Q: How do you connect to the PC from the iOS device?

Q: How does everyAir understand the game gestures?

A: We’re using a custom build of everyAir, and it’s hardcoded to understand these gestures. Additionally, it knows how to pipe input to the mouse/kb device in a way that it expects.

Q: Will this be publicly available?

A: We plan to release a fully customizable version at some point in the future.