Facebook announced their new app for iPhone, version 3.0 with a hefty feature list. Missing in the list was video capture and upload. Joe Hewitt, a Facebook employee working on the iPhone app tweeted a day after, that video uploading has been implemented in the new Facebook iPhone app – but there’s a catch. You won’t be able to watch your friend’s Facebook videos yet on the iPhone because Facebook videos are encoded in a very high bit rate which the iPhone doesn’t play. This might change in the future though, either through updates to the iPhone OS, or changes made by Facebook to encode videos in an iPhone compatible bit rate.

Even without the playback, it’ll be great to use your iPhone 3G S to record and upload videos directly to Facebook. Expect the new app to appear in the App Store this summer. 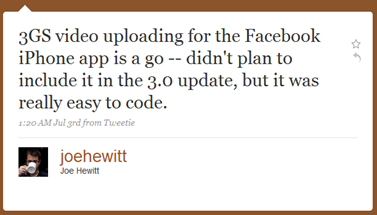 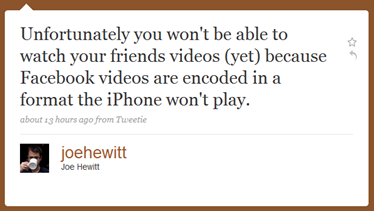