If Twitter clients weren’t enough already, Facebook recently updated its API to allow developers to create client applications that would let you update your status or keep an eye on your stream. But which are most popular Facebook clients amongst them all?

TweetDeck is one of the first Twitter clients that made the multi-column layout so popular. Facebook functionality was introduced as soon as the steam API was announced. The problem with TweetDeck is that tt shows friends’ statuses only. It also offers Facebook chat inside the client, which is just the chat pop-out that opens inside the client and nothing special. Your friends online status is also shown with their updates as a green icon, but then again, TweetDeck isn’t supposed to be a chat client.

Seesmic Desktop is another popular Twitter client that’s pitted against TweetDeck a lot. It has a way more functional Facebook stream than TweetDeck as it shows image, video and link shares from your contacts along with the usual status updates. You can also update your Facebook status through it, and post pictures to Twitpic or any other Twitter image sharing service, but it won’t let you post images to Facebook directly. Also, to comment on feed items or to like them, it takes you to another page which is kind of an annoyance. But it still has a better implementation of the Open Stream API than TweetDeck. 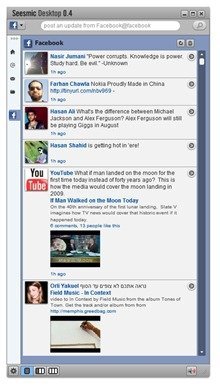 bDule is the first WPF based Facebook/Twitter client in this list. It provides a lot of functionality. While the Twitter features are good too, I’ll just talk about the Facebook ones here. The best things about the Facebook stream in bDule are filtering and photo upload. Yup, it’s the only client amongst this list that lets you directly upload images to Facebook to any of your albums or just to your wall. You can also filter your feed to just show the status updates, album updates or just links. You can also comment and like feed items without having to go to another page. Overall, it’s a highly recommended Facebook client! 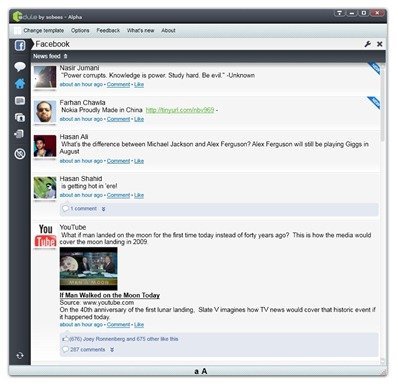 Facebook desktop for Air is an official app by the company. It’s a very basic application but a good one none the less. You can see your timeline and comment or like the items. Strangely, it doesn’t show thumbnails for video shares, but it works pretty well for pictures and status updates. 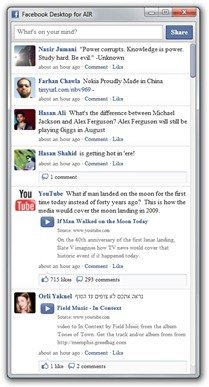 This is it for today’s Apps for Windows. There are a lot more applications that provide quick access to Facebook from your desktops such as sobees, Flock web browser and the still unreleased Facebook apps based on Silverlight and WPF by Microsoft, but these are some of the most popular ones. In my usage and testing, bdule turns out to be the most feature-rich desktop app, therefore I recommend it to everyone else. If your experience is different and better with other applications that I didn’t mention in this blog post, do share it!