Last month, Apple gathered all the Augmented Reality (AR) games and apps in one place under a new section called “The World Around You – Augmented Reality Apps” which initially featured only 18 apps n games together. However, none of them seem to appeal much (to me personally) to be worthy of spending a dime for. But now, Lucas Arts has brought the first ever Star Wars AR game for the iPhone called Star Wars Arcade: Falcon Gunner, available for $4.99 on the App Store. This one definitely makes me wanna spend! 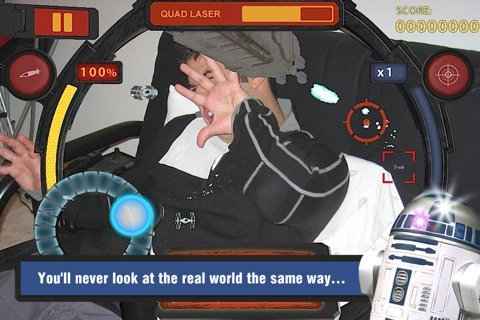 The most appealing part of the game is the Augmented Reality or the AR mode in which the computer graphics backgrounds are replaced with the view on your camera. This allows you to play outdoors or in your room which makes the spaceships look as if they were coming in from the distance. Cool eh!

for iPhone 4, iPhone 3gs, and iPod touch 4th gen. only, while older devices may experience some memory issues.

Watch this video below, taken from the Empire State Building to get some idea about the AR mode of the game:

Main features of Falcon Gunner for iPhone & iPod touch are:

AR MODE BRINGS THE FIGHT TO YOUR LIVING ROOM: Using your phone’s camera, gyroscope/compass and accelerometer, Falcon Gunner turns your earthly surroundings into epic space battles and lets you control the action by steering your body in physical space. It’s like nothing you’ve ever seen.

SPECIAL MODIFICATIONS: As you blast your way through waves of TIE fighters, Star Destroyers, and a few other special surprises, you’ll earn credits that can be used to make special modifications to the Falcon’s offensive and defensive capabilities, including concussion missiles and a low-level tractor beam… perfect for grabbing TIE interceptors and launching them back at their black-helmeted buddies. (And if you’re impatient, you can purchase them from within the game.)

RETINA DISPLAY SUPPORT: The Millennium Falcon’s scratched-glass windshield has never looked as good as it does on iPhone 4 and iPod Touch (4th Gen).

GAME CENTER AND FACEBOOK INTEGRATION: Challenge your friends’ scores and earn special surprises by connecting your game via Facebook and Game Center. 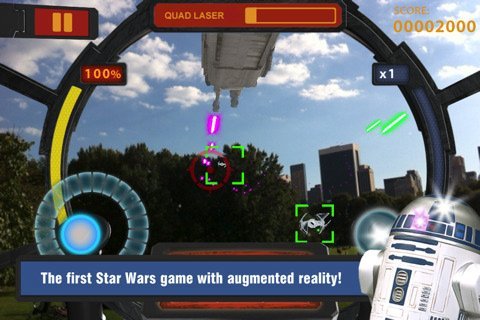 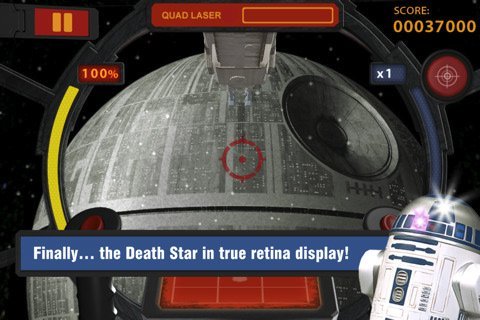