Firefox has been updated to version 5.0 for iPhone and iPad. The new update brings performance improvements, battery optimizations, site-specific search providers, a new menu with quick access to important features and more. 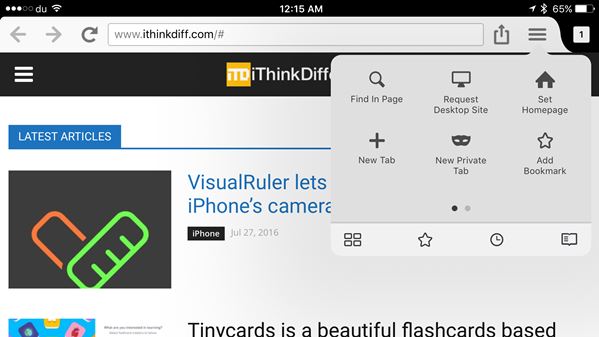 The major updates to Firefox 5.0 are under the hood optimizations which make web pages load faster while making the app more efficient which results in battery life improvements. This applies to both iPhone and iPad but real-world results may vary.

Here are all the new features in Firefox 5.0 for iOS:

Since all third-party browsers have to use Safari’s rendering engine, as per Apple’s developer guidelines for App Store, the only way browsers can compete with each other is in terms of features. Compared to Opera and Chrome for iOS, Firefox is a good alternative. It provides complete browser sync, including bookmarks and history, intelligent search, private browsing, visual tabs and much more. The only missing feature, which Firefox already has on Android, is extensions support.

If you are a Firefox user on desktop, the new update for iOS is a no-brainer. You can download it now for iPhone, iPad and iPod touch.