Mac OS X has a pretty solid disk utility for scenarios where you might want to create, resize or delete or modify new or existing partitions. However, in rare cases, the utility might not be as helpful as it should be and can leave your Mac’s SSD or hard drive in a mess. 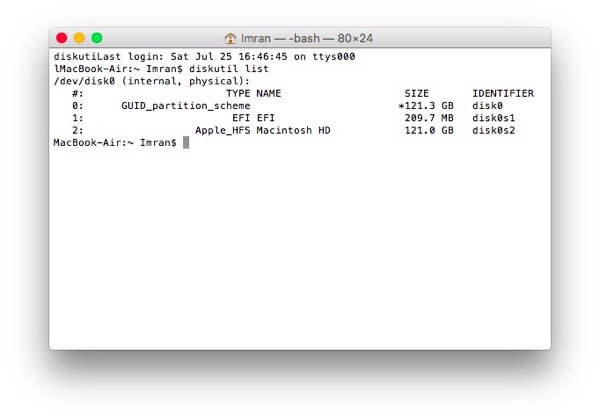 Such an experience happened recently with yours turly. I had installed Windows 10 Insider Preview via Boot Camp on my MacBook Air but it stopped working due to an incomplete Windows Update. I decided to remove the installation from my Mac but the Boot Camp utility in OS X used to get stuck after a while when recovering the partition to the original size. Meanwhile, Disk Utility showed the space as reserved for Boot Camp but did not show or allow me to mount the drive so I could delete it and merge it with my OS X partition.

So, here I was, left with half of my disk space on my MacBook Air (I have the 128GB variant). From prior Windows experience, this reminded me to take the command line route, or Terminal, in case of Mac. A little research through Apple’s support documentation for the right OS X Terminal commands led me to the below solution.

How to delete a partition through macOS Terminal

In case you ever get stuck in a situation where you are unable to recover a partition on your Mac, follow the below steps:

Similarly, these commands can also be used to create, mount, unmount, rename partitions and do much more on your Mac. Type in diskutil in the Terminal and hit enter to see the complete list of supported commands.

If you require any help in the above steps, feel free to reach out to me via comments below or on Twitter.