Google’s keyboard for iOS, Gboard has been updated to version 1.1.0 with a few new features which include Smart GIF suggestions, new languages, a dark keyboard theme as well as the ability to use your own image as background. Gboard is now available globally in the following languages: English, French, German, Italian, Portuguese and Spanish. 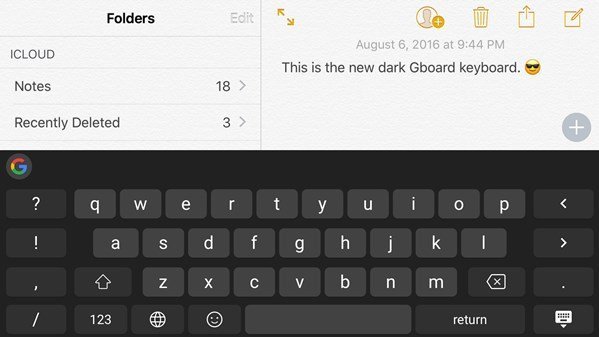 Gboard Smart suggestion now include GIFs as well. Type in happy or excited to see related GIFs to express emotions. Previously, users could use Smart suggestions for text, emojis, and search. Users can also give Gboard different looks by personalizing it. Users can choose a darker keyboard theme or set an image of their liking as Gboard’s background. To customize the look, open the Gboard app and tap on ‘Theme’.

To deliver smooth functionality, Gboard now uses the same language as the default language of a user’s iOS device. If the user has any language which is not cover by Gboard, it will automatically choose U.S. English as its language.

While there are countless options for third-party keyboards in the App Store, not many stand out. Most have performance issues or just provide features which do not provide much value. Google’s Gboard has been an exception. When Gboard was launched back in March, we reviewed it and considered it to be one of the best iOS keyboards that made us move away from Apple’s default keyboard. Things have not changed since then for third party keyboards. This is Gboard’s first major update after release.

With iOS 10, Apple has provided a number of new features which include smarter predictive text input and emoji suggestions, however, it still lacks in a number of ways where Gboard is helpful. With Gboard, you can multitask. For example, planning an outing is easy as you can check the weather, share restaurant suggestions and reviews and even perform any other searches right from the keyboard.

Gboard is free for iPhone and iPad and works with iOS 9 and above.