Google has released a new keyboard app for iPhone called Gboard. It supports web, image, GIF searches from anywhere in iPhone where you can use the keyboard as well as glide typing. 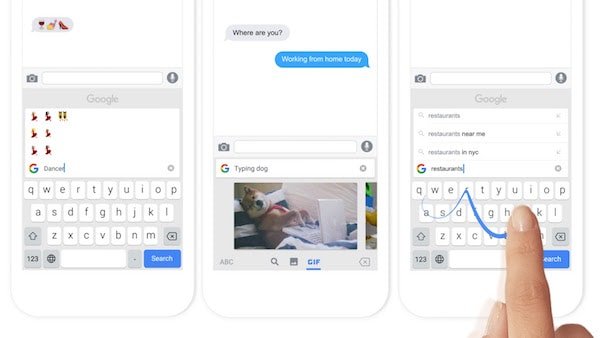 Google’s keyboard puts their logo on top of the keyboard so it makes it easy to quickly perform a search and share the result in the text field. Searching for locations, images, GIFs or even any YouTube video is quick and simple. The keyboard is also very smart and provides predictive search so you could type in something like ‘do you want to watch a movie?’ and the keyboard will suggest to search for theatres nearby. This brings a whole new level of intelligence to iPhone.

The keyboard also supports glide typing so you can swipe your finger on different letters quickly to type out your text. It also has emoji suggestions so you can type in happy and the suggestions will show a smiling emoji. Other features include auto-correction and the usual capitalization, character preview and so on.

During testing, Gboard seems to be one of the best third party keyboards for iPhone. I have used several third party keyboards before which have been major let downs, mostly due to performance. It seemed that Apple has not put in enough effort to allow good keyboards but Gboard proves that wrong. This is the only keyboard which has actually made me switch from the default iOS keyboard.

Even Google’s keyboard on Android does not offer such quick access to their search results, although, one could argue that Google’s Now on Tap fulfils the need for quick searches.

The app is available in English only for US users and can be downloaded for free on iPhones running on iOS 9. It is worth a try and might convince you to switch as well.