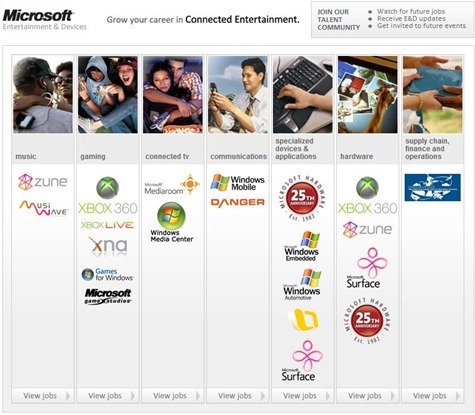 Just when you thought Microsoft was ‘uncool’ and jobs are as rare as a pink elephant, they step up and create a new social networking recruiting website called Microsoft Entertainment Jobs. If you’ve always wanted to work on the Xbox, Zune, Media Center or other entertainment products and divisions at Microsoft, this is the website to be at. As Todd Bishop pointed out some of the profile features at the website.

The recruiters’ profile pages feature their pictures, a favorite video, the available positions for which they’re recruiting, and links to their profiles or feeds on such sites as Facebook, LinkedIn and Twitter. The Microsoft site also has a built-in feature that people can use to tell their friends about available jobs using social-networking sites and other online tools.

Microsoft has actually aimed to provide a cool, friendly and easy to reach image with M.E.J. Even though candidates might not find jobs right away, it’ll keep them connected with each other and give them a chance to interact with the recruiters. It also gives Microsoft a chance to have an additional talent pool available at their service for whenever they need it. This website isn’t just the only way through which Microsoft is trying to give a positive vibe, despite the economic crisis.

ViewMyWorld is another initiative which shows you how it is to work at the Entertainment & Devices Division. The paragraph on their main page says it all

We help people play and work better. The DJs, bloggers, gamers, super-texters — they’re all drawn to our products. In the Entertainment & Devices Division (E&D), we put games, music, video, and mobile technology into the hands of millions. And we’re having a blast doing it. This is what it’s really like to work on Microsoft Entertainment & Devices. 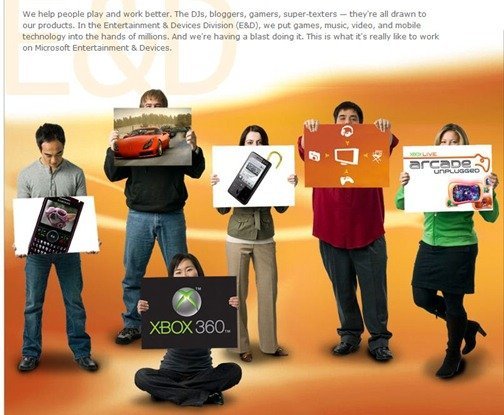 This website actually has some cool stuff to go along with job search and how to apply. They’ve got a videos and blogs section which actually makes you want to work at Microsoft. The videos are pretty interesting to see. Seems like GooglePlex isn’t the only ‘cool’ place to work at! Even the reasons that they give on why work @ Microsoft are very convincing. 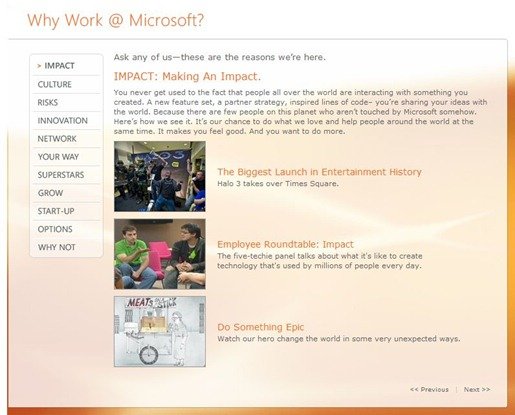 Another website You at Microsoft give you insider stories from Microsoft employees. Every employee has their own video along with an interview which shows what they felt about Microsoft before joining it and how it changed their perception after they became a part of it and got the chance to change the world, along with sharing their aims and passions and what they do at Microsoft. At the bottom of the website are facts that change after every few seconds showing how good is Microsoft as a company.

As with the other websites, this one also tries to convince you to work at Microsoft. Not that you need to be convinced to change the world, but it also tells of the opportunities that await you at Microsoft, diversity at the company, and the impact you can make while being there. There is an event calendar too, so you can find out what it is like working at Microsoft by attending one of them. 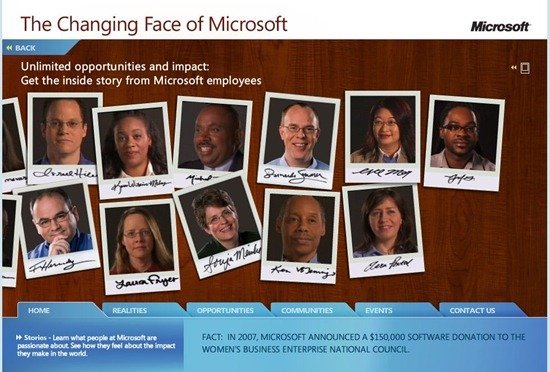 While not all these websites are new, they show how the Redmond giant is committed to finding great talent, even when every other company, including itself has gone through the process of lay offs. There is a silver lining in the cloud, and you need to be prepared for it when you see it. That’s what Microsoft will achieve through these websites. Preparing for the future, even if the present seems dark.