The announcement of the next version of Android OS, Android 4.2 is around the corner and we are starting to find out more information about its features. As uncovered by Android Police, the Gmail app for Android 4.2 will finally feature support for pinch to zoom and allow swipe to archive or delete emails. These are features which most of the Android users eagerly wanted in Gmail app for Android and it looks like Google has finally listened to the community.

Pinch to zoom is one of the highly requested features for Gmail app and it is very good to see this finally implemented. This allows users to zoom in and out of emails very easily and smoothly using multi-touch pinch gestures. iPhone has had this since its very early days so Android users can rest easy now that Google has checked off this missing feature in their mobile OS’ list. The other feature is swipe to archive/delete which allows users to swipe on an email in a list to quickly archive or delete it. If you  accidently archived or deleted an email, a swiped message will leave behind an undo button for quickly calling it back. 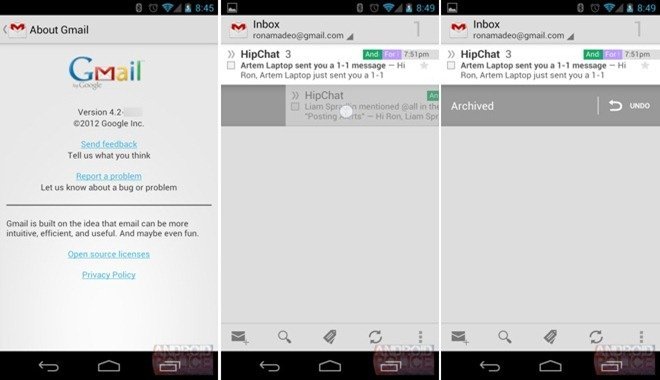 To support its claims for the discovery, Android Police has posted a full video demonstrating these new features of Gmail App for Android 4.2.:

This video has been recorded using a leaked version of the app and Android Police has also released the apk to the public. You would need a rooted Android device running on at least Android 4.0 (Ice Cream Sandwich) to be able to install it, though.

Google is expected to introduce Android 4.2 later this month, along with the rumored LG Nexus smartphone. We have already covered some of the rumored features of Android 4.2 which include Customization Center, improved Google Now, Project Roadrunner (battery life improvements), improved Google Play and a revamped built-in video player. We’ll keep you posted as we find out more.