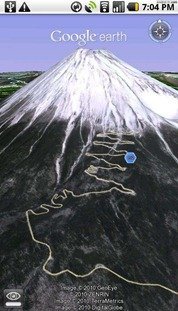 Google Earth for Android was revealed during the Google Nexus One launch event, but it wasn’t available for public use back then in the Android Marketplace. Well now it’s finally available in the Marketplace for you to download and check out it’s features!

There is a downside for that though. You can only get it if you have Android 2.1 and onwards. So devices such as the Motorola Droid, Samsung Galaxy, HTC Hero, etc… can not benefit from the application as Android 2.1 isn’t available for the devices, yet. Droid Eris, Sprint Hero, and HTC Hero in Europe/Asia users will soon get the update, as well as the Motorola Droid (which was rumored to get the update weeks ago, but nothing was seen until now). The users will benefit from the Google Earth application.

The mobile Google Earth application covers most of the features on the desktop version. You can also use the pinch-to-zoom multitouch technology to zoom into places, and to see satellite images from all around the world. Some of it’s common features such as borders, roads, etc… are also included.

Use Google Earth to explore the world from the palm of your hand. Fly around the planet with the swipe of a finger, as you view the same 3D imagery available in the desktop version. Search by voice for cities, places, and businesses. Browse layers of geographic information including roads, borders, places, photos and more.

What are you waiting for? Head to the marketplace if you have Android 2.1, and get Google Earth.

If you have a Barcode Scanner on your device, you can scan this to go to the app to download it: 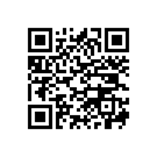