Google has finally begin migrating Google Voice to Hangouts by introducing free (and paid) voice calls on Android, iOS and the web. Google already had the calling feature available on their old Google talk interface but this feature took ages to appear in the new Hangouts apps and interface. 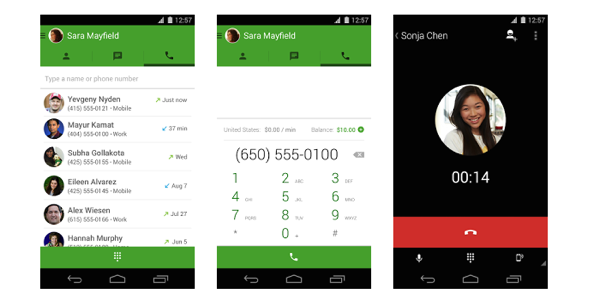 The new calling feature in Hangouts is being introduced via app update for Android, along with the release of a new dialer app. On iOS, Google’s dialer app was already available, which is kind of odd that Google would introduce a new feature for a third party platform first. For Android, users would have to download the latest Hangouts update, version 2.3, which would be rolling out over the next few days. They would also have to download and install the new dialer app to enable voice calls. For iOS and web, users would just have the voice call feature enabled, the next time they open up Hangouts. Having to install two apps to get this functionality to work is not the most convenient thing so Google might need to merge them in the future.

With free voice calls, Google is entering a market which is currently dominated by the likes of Skype so it will not be easy for the Mountain View giant to gain traction. However, the benefit of free calls to United States and Canada is going to give Hangouts a big jump start as nothing beats free.

Calls to numbers in Canada and United States are free, while international calling is available for cheap rates, as listed here. Google voice calling on Android and iOS is a welcome addition and would save users a lot of money, specially on international calls. At a quick glance, the calling rates seem high competitive when compared to other services but your mileage may vary depending on which countries you call.