Google Maps Mobile has upgraded to version 3.3. The new version has one new feature which allows you to keep starred items in your phone completely in sync with the ones on your computer. With the introduction of features like Latitude, My Location and now syncing of starred items, Google has made maps extremely convenient and efficient. 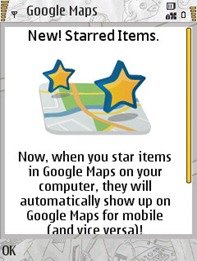 If you’re upgrading from an older version, you’ll be asked if you want to sync your existing starred items. The upgrade is available for Symbian and Windows Mobile phones only but Google promises that there’ll be an upgrade for other mobile versions of Maps. You can read more about the new version on Google Mobile Blog.

You can download Google Maps here or go to m.google.com/maps in your phone’s browser to download it directly to your phone.