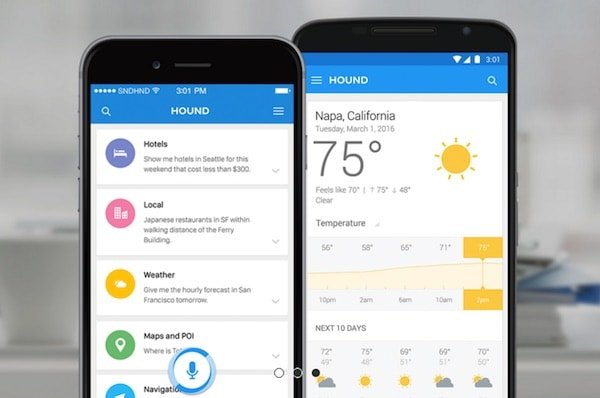 Hound, developed by the music recognition service SoundHound, is a direct competitor to Apple’s Siri, Microsoft’s Cortana and Google Now. It has most of the features that its rivals offer, excluding native integration with any platform. Hound is super fast at voice recognition and in demos, it almost instantaneously converts voice to text. It also shows card like views for different search results.

Supported third party services include Uber, Yelp and Expedia while more are on the way. Built in queries support is available for weather, local places search, flight status, hotel search, phone calls and text messaging, web searches via Bing, calculations, video, image and news search and much more. It also has hands-free support via the keywords ‘Ok Hound’.

Hound beats Siri and Google Now by recognising complex questions. Compared to manual search, these queries might require opening up multiple browser tabs and websites (or apps), applying filters and combining them manually to get the required information. Hound understands and responds to questions which have specific information like how long would an Uber take to reach a hotel in your area which allows pets, is under a certain cost and if it has free WiFi. Now, that is smart!

Overall, Hound is a very competent alternative to currently available native solutions but this is where it ends. It does not deep integration with iOS or Android, the two platforms on which it is available. While it can provide more functionality on Android as compared to iOS, due to its open nature, compared to Siri and Google Now, it cannot beat them. Google Now and Siri have grown and expanded to the point where they have integrations with cars in the form of Google Auto and Apple’s CarPlay, respectively, so it is tough to imagine that it will be able to reach that level.

Even though it might lack in native integration, if it can beat its competitors in performance and complex query understanding, it has a place in the mobile apps ecosystem. To see it grow further, I would like to see it make itself available on Windows, OS X and Chrome OS, along with cross syncing, which would give it an advantage over others.

Hound is available in US only for now as a free app. It is worth a short and from the positive reviews it’s getting (4.5 stars in App Store and praises from many websites), Hound seems to have a place amongst the big giants.