Apple has released new updates for iOS 10 beta in the form of 7th developer beta and public beta 6. The updates are very small in size, around 60 MB for iPhone, iPad and iPod touch and are available via over-the-air updates now. 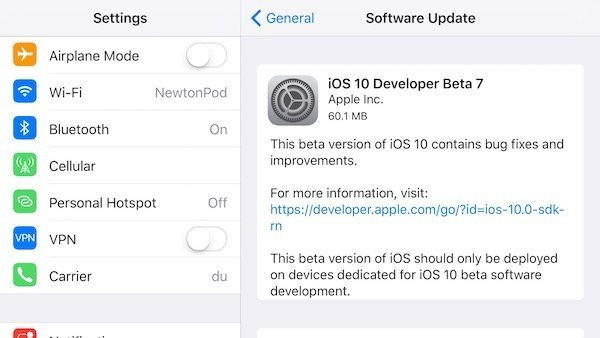 This is the second update to iOS 10 beta this week. Apple had released developer beta 6 just 4 days ago, which was also a minor update and only contained small changes. The most important improvements in the previous release were better battery life and faster animations.

To update to the new beta, go to Settings > General > Software Update to download the new build. Make sure that you are on WiFi and your iOS device battery is at least 50% charged. Alternatively, you can download the new update from Apple Developer Center. If you are not signed up for the iOS public beta program, you can register by following our guide here.

It is expected the the final iOS 10 build will release next month, perhaps before or with the launch of iPhone 7.

We are currently downoad the updates on our iOS devices and will update this post if we find anything new. Given the download size, it is likely that this release only has minor bug fixes and stability improvements.