Apple seeded iOS 14.5 beta 2 a few days ago with a number of new features and improvements. Now, developer David Barnard has discovered that Apple has updated the subscription sheet with clear pricing, explicit information, and some design changes.

David Barnard, the founder of Contrast and was the developer behind Launch Centre Pro, shared a concept subscription sheet in 2019 with clear pricing, a new logo, and explicit information which are similar to the new changes found in the iOS 14.5 beta 2 in 2021. Therefore, in his shared tweet, Barnard wrote,

“Apple appears to making some changes to the “buy sheet” on iOS 14.5. Not quite as dramatic as I hope they’ll eventually do, but headed the right direction.”

Barnard’s images of the subscription sheet in iOS 14.4 and iOS 14.5 beta 2 show that Apple has made the following changes: 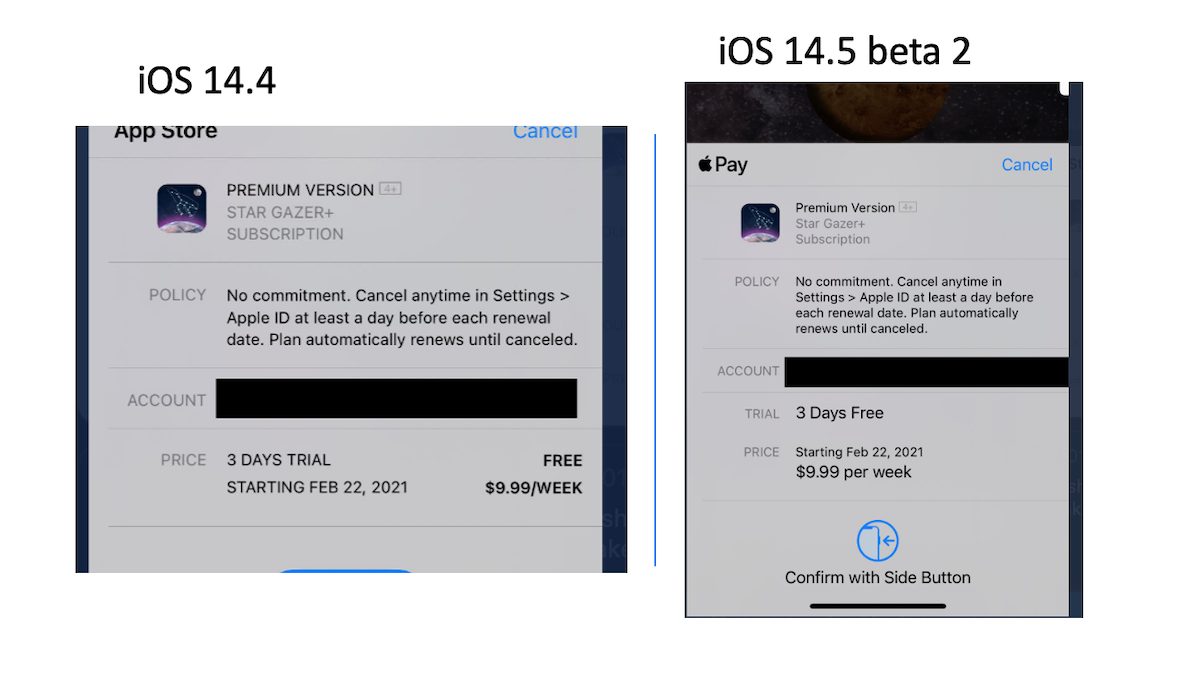 When compared to the older version, the information on the new subscription sheet is more visible. And that is important because the previous format could have been used to scam people by malicious apps. In 2019, Barnard explained that,

2/ After years of begging Apple to study the App Store as an economy (looking at all the factors influencing pricing, supply, demand, efficiency, failures, customer satisfaction, etc) I get the impression that they still aren’t doing this, at least not systematically.

3/ When subscription scams started cropping up in 2017, Apple should have seen those apps rocket up into the top-grossing lists and started investigating why those apps were doing so well, then started making systemic changes to prevent those scams from working.

4/ For example, had they dug into the stats, I bet they would’ve found a much higher conversion rate for TouchID devices. They could’ve found and fixed that in 2017. Instead, it wasn’t addressed until just a couple of months ago.

Apple appears to making some changes to the “buy sheet” on iOS 14.5. Not quite as dramatic as I hope they’ll eventually do, but headed the right direction. iOS 14.5 beta 2 vs iOS 14.4 https://t.co/miDq0HPdSY pic.twitter.com/QIqQVvkcDi