Apple has released its newest version of iOS today, fixes the PDF exploit that is used with Comex’s jailbreak. This was obviously also a security fix for Apple as it would allow users to view malicious PDF files on their iOS device. This update is compatible with the iPhone 4 (GSM), iPhone 3GS, iPad, iPad 2, iPod Touch (3G & 4G). 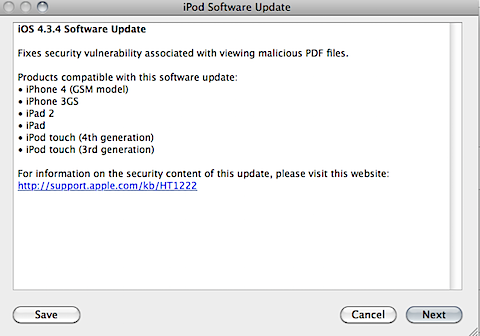 If you jailbroke your device using JailbreakMe, then you should stay away from this update. Until Comex is able to fix the jailbreak, this update is not advised for jailbroken users.

Here are the direct links for the new version of iOS 4.3.4: