iOS has an indicator in its status bar which shows up when there is Internet activity happening in different apps or at the system level. For cellular networks, it’s very helpful to know when data is being used, but it’s equally useful on WiFi networks too. A similar app appropriately called Loading has been released for OS X which animated during network activity, but also shows which apps are sending or receiving Internet traffic. 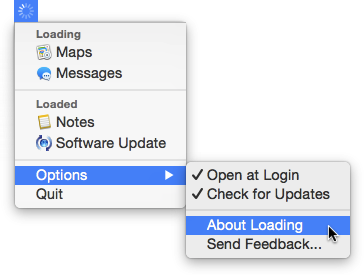 Loading is a free app by Bonzai Apps which sits in the OS X menu bar and shows apps which are loading data and also those which have completed the data loading process. It opens conveniently at login (can be changed through options) and starts doing its work. The animation is exactly the same as the iOS indicator, so it fits very well in the OS design.

For advanced users who really want to know details about each process consuming network traffic, including its location in the system, a handy shortcut allows them to do just that. Just hold down the option key on your Mac keyboard and click on the Loading icon to see the detailed view as shown below. 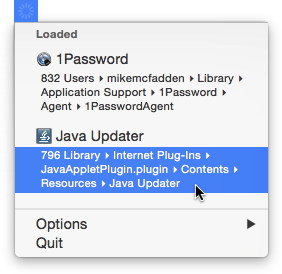 It would be great if Apple includes this nifty little feature in the next OS X release although I highly doubt that would happen. For a 2mb app, it now sits in my must have apps list for OS X.

P.S. it looks great when using the Dark menu bar in OS X too.