Good news those who were waiting for the 3G version of iPad because they would be ship by 7th of May to U.S. customers as Apple has updated its site with this new information.

The Wi-Fi version of iPad was launched on 3th April and according to Apple they have sold over 500,000 of them, because of which the international launch of iPad is delayed. The iPad is now expected to be launched internationally in late May. 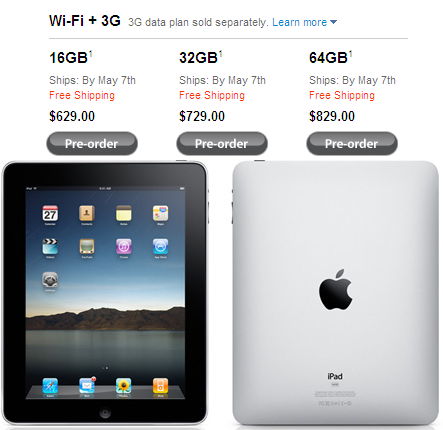 The 16GB Wi-Fi+3G version of the iPad is available starting from $629.00. AT&T would provide 3G services to the U.S. users of iPad. AT&T would be offering two plans which are shown in the image below. iPad 3G would be much more fun to use with the unlimited data plan by AT&T as you would be able to surf the Internet on your iPad where ever you go.