If you are a baseball fan and planning to watch a match live in Yankee Stadium, you should not even think about bringing your iPad there. Well if you do bring you iPad their then you may end up going back home or going inside without your iPad. 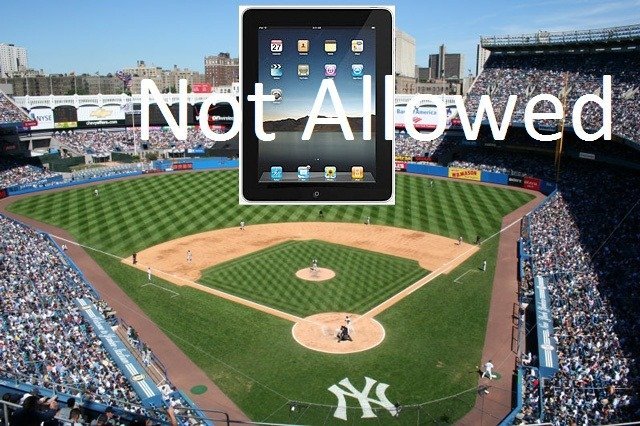 According to a report from Yahoo Sports, iPad is somehow included under the “no laptops” rule in the security policy of Yankee Stadium so you are not allowed to take your iPad there. That’s what Duk wrote in his report:

Actually, they won’t let anyone bring their cool new toy through the gates. I called over to the Yankees’ security department to confirm this story and was told that the ban is true. All iPads fall under the “no laptops” rule in its existing security policy and are not allowed at Yankee Stadium.

There are many things odd about this iPad ban. First of all, iPad is not a laptop . Secondly, a device like iPad is obviously safe and there’s no way it would damage anything in the stadium. Well, unless you hit someone in the head with it, then there are chances of blood and pain.

Still, if somebody asks why you need an iPad while watching the match. Here are a few answers: you can access great apps like ESPN iScore Baseball Scorekeeper app or you can use any other app if the match gets boring. And another reason could be that the stadium is at a long drive from your home and you need to access internet with your iPad 3G. You could also be a blogger like us and addicted to the Internet and writing blog posts on the spot.

We’ve got you covered with the reasons. You’re welcome.