According to data collected by pingdom, there are more iPads browsing the web than Linux machines.  Some people are probably saying, “What’s Linux?”; While others are probably wondering how this could be true.

The statistics above are from April of this year, and only 19 days of it so far.  The interesting fact to note is the iOS column only includes iPad’s.  There are no iPhones or iPods included with that statistic, which in my opinion, just makes it that much better.  Windows makes up about 81% of browsing activity, MacOSX makes up about 15%, iOS (only iPads) makes up just over 1% and Linux comes in under 1%.

As an iPad user myself, I find this statistics to be pretty accurate.  Of course, Windows will make up most of the market, and it’s not surprising that MacOSX is next.  However, it is a bit surprising that iOS beat a desktop OS in browsing statistics.

You can see below that the iPad has grown substantially since it’s launch, with the biggest jump during Christmas (popular present?).  And that statistic will only grow with the iPad 2 release recently and more people straying from their desktops to surf on their tablets. 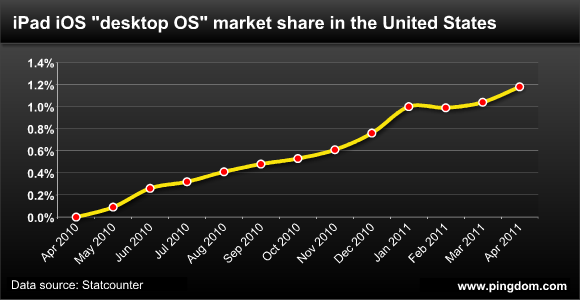