Since the Microsoft Kinect has come to market, hackers everywhere have been writing firmware and drivers for this device to be used in much different ways. Since the Kinect already uses a USB interface, it was very difficult to get that going. 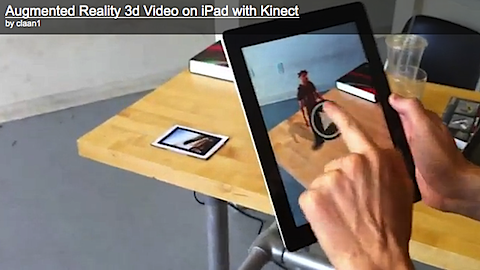 It has taken some time to port the Kinect to the iPad, but the team at LAAN Labs has created this application to take advantage of the Kinect Motion abilities and the iPad Tablet. In the video below, they successfully use the Kinect to capture 3D data and feed it wirelessly to the iPad which enhances it on it’s screen. This was all done using the String Augmented Reality SDK for iOS.

The video is a great example of what could possibly be coming from Apple in the coming months. There have been rumors of an Apple branded television, which now may have motion controlled gestures built into the set.

Watch the video below for a demonstration of the Kinect and iPad using Augmented Reality.