Amie Hall, a 17-year-old English teenager suffered a facial burn after her iPhone charger caught fire after it was plugged in. On March 18, the teenager plugged in her iPhone to charge before heading to bed. Just before falling asleep, she noticed “flashing orange” flames on her blanket. 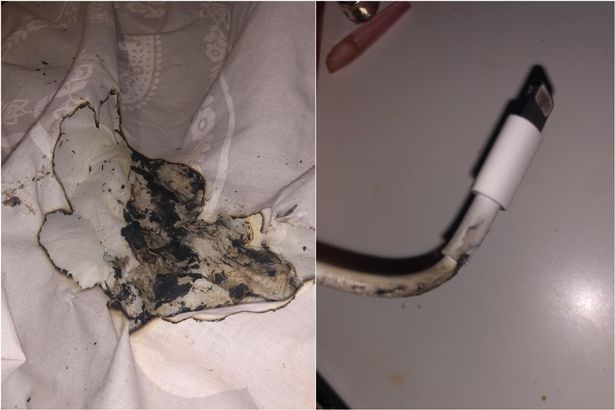 Hall, who is a former dental nurse, was about to fall asleep when she spotted ‘flashing orange’ flames on her duvet. As the flames burnt through her duvet, they caught her face leaving a burn on her cheek.

As soon as the incident occurred, Hall rushed downstairs to inform her mother who was able to extinguish the flames without the assistance of firefighters. “There was no need for the fire service to attend as my mom had managed to put the fire out herself,” Hall told Birmingham Mail. “I would just like to spread the word to please make sure people take note – it could have been a lot worse.”

Currently, we do not know what caused the fire. Usually, third-party iPhone chargers can cause issues like this but the story is not clear on whether this was caused by an Apple plug. The report states “It’s not known whether the charger itself, consisting of an Apple wire and another brand’s plug, caused the fire or whether the socket at her home was faulty.”

However, in a Facebook post Hall wrote “This isn’t even a cheap charger, it’s an Apple charger,” she continued, “Please don’t go to bed and leave your phone charging overnight.”