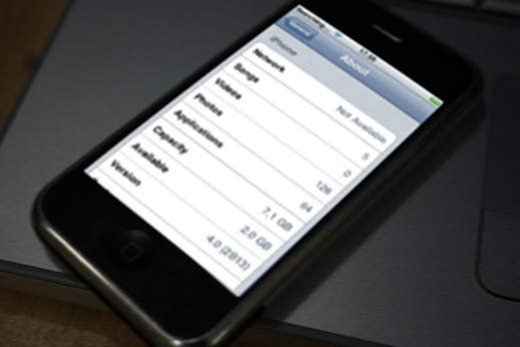 A lot of people were disappointed by Apple’s announcement that iPhone 2G wont get OS 4.0. Many would say that this is ridiculous because if iPhone 3G can have the 4.0 update, why not 2G? This could be based on some technical issues but we would never know until we get our hands on the OS release by this team called ‘Rebuilding OS Group’ who are working on bringing iPhone OS 4.0 to iPhone 2G.

The team working on this project has quiet a history in hacking and modding software:

We are a group of 5 programmers engineers with a passion for open source world, in the course of our marriage we have participated in numerous collaborations on changing operating systems like Unix for the European community. Amended amateur Linux distributions, found flaws in web server, decompile and analyze areas of Assembly code of Windows 9x and created custom firmware for portable devices such as portable play station and Nintendo.

Here’s a look at some of the progress that the team has made so far on iPhone OS 4 for iPhone 2G:

-We are rewriting the 4.0 beta firmware released by Apple to create a custom firmware that can run on devices iphone 2g which is no longer available. To do this we studied the architecture of the firmware previously released by Apple on the device trying to understand how is it different from the released versions on other devices, in particular that of the iPhone 3G device, which is what most resembles the smartphones.
-We started rewriting some procedures are completely different from the other device, because this most likely hardware 2g iPhone which needs a different interface to the software side. We had to rewrite classes, procedures, protocols, and tunneling pipeling values and procedures, and drivers.
-We thought that the work was less demanding, but we have spent over 10 days in 3 people working five hours a day to rewrite an alpha of our custom firmware, all this because of the antiquated interface hadrware / software it needs the iphone 2g also because the 3G is almost identical to it.
-Obtained a first alpha release of custom firmware, we proceeded to write software that interacts with everything and bring the system on the device, we have relied on PwangeTool already had a basic concept of jailbreak and insertion of a custom firmware certificate . We decompiled in assembly code so you can take inspiration on the procedures we needed and adapt to our new tool for the custom firmware 4.0, firmware did not give us too many problems because now we have decided to take it to the beta instead of alpha.

Check out the rest of it on their project page here. It seems like they’ve got 40% of the system working so far, but they have to get the WiFi working and get good battery time from the modified OS.

It has taken a good amount of time for hackers to actually get other operating systems running on the iPhone, such as the recently available Android for iPhone 2G. (I might be wrong, correct me if there are any other OS working on the iPhone ) Now they’re even modifying Apple’s own OS to get it working on their own device. Seems like an exciting future for the iPhone because modding is something us geeks love!