According to iLounge, the new iPod nano also has secret diagnostic mode, just like the previous generations. It’s called the iTerm and lets you test everything on your iPod nano including your power, touch screen, memory, USB connectivity, radio, accelerometer, etc. Following the instructions given by iLounge you can access iTerm which takes you back in time to a retro black and green display that lets you test the aforementioned functions. 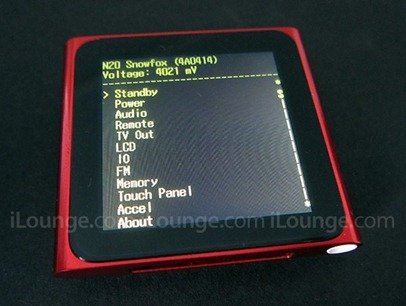 1. Reset the iPod nano by holding down the sleep and volume down buttons until the Apple logo appears.

2. Hold down all three buttons during reset to access iTerm. Your screen should briefly flash “iTerm: iPod Display Console”.

3. Next you should see the menu screen. Use the device buttons to navigate through this screen.

*You can also access the Disk Mode by holding both the volume buttons during reset.

According to iTerm, the sixth generation nano is codenamed “N20 Snowfox”. Like previous iPod nanos, the new nano also features a hibernation mode in which the iPod switches to a low power mode after 14 hours of battery consumption.