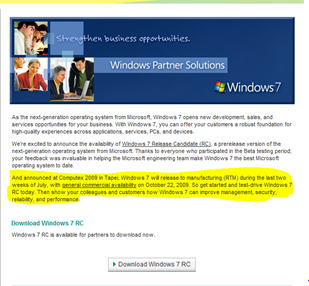 And announced at Computex 2009 in Tapei, Windows 7 will release to manufacturing (RTM) during the last two weeks of July, with general commercial availability on October 22, 2009. So get started and test-drive Windows 7 RC today. Then show your colleagues and customers how Windows 7 can improve management, security, reliability, and performance.

This means that the RTM time frame was already announced at Computex 2009. So, now we know that Windows 7 will definitely RTM within the next 20 days. MSDN and TechNet will get it soon afterwards. That’s good news along with the fact that you’ll be able to upgrade your existing Windows 7 RC installations to Windows 7 RTM.