Microsoft has released new commercials starring Windows 10 PCs and their features, while at the same time, taking a shot at Macs and OS X. The narrative of the 4 videos revolves around these bug chicks discussing how useful some of the features in Windows 10 are such as Inking, Hello and Cortana. 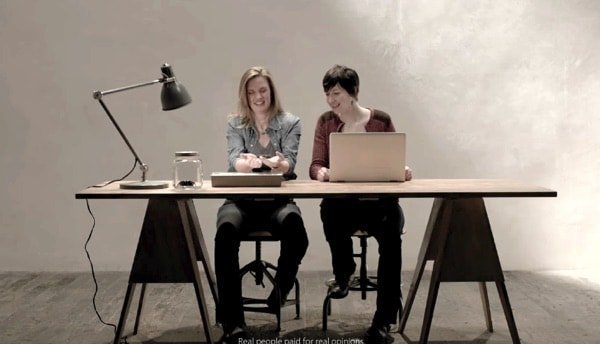 Inking is Microsoft’s name for drawing on a Windows 10 touch screen however, the laptop like angle of the screen in the ad doesn’t really seem comfortable. A tablet like device that can lie flat on a surface or rest against the user’s arm seems like a better option. Hello is Microsoft’s implementation of login using facial recognition or via finger print sensors. And Cortana is Microsoft’s digital voice assistant. The bug chicks end each ad with the line: ‘Even on the new Macs, they don’t have that’.

Why Microsoft still keeps on taking shots at Apple, rather than improving its products, is unbelievable. It seems that the Redmond giant is still stuck in the past where Mac vs PC was a thing and it was the only way either of the companies could win users. Nowadays, users are smart enough to chose their own platform and devices and can easily see through the absurdity of such marketing tactics.

Here are all the ads below:

It’s funny that the bug chicks do not mention any of the bugs present in Windows 10 and Surface PCs (and the multiple privacy concerns in Windows 10).

This is not the first time Microsoft has made such commercials attacking Apple’s products and it definitely would not be the last time.