If you are to trust StatCounter’s statistics for the previous month, Opera Mobile/Mini rule the global mobile browser market with 26.16%. Opera is available for Windows Mobile, Nokia Series 60, iPhone, Android and all Java handsets, so this doesn’t come as a surprise. 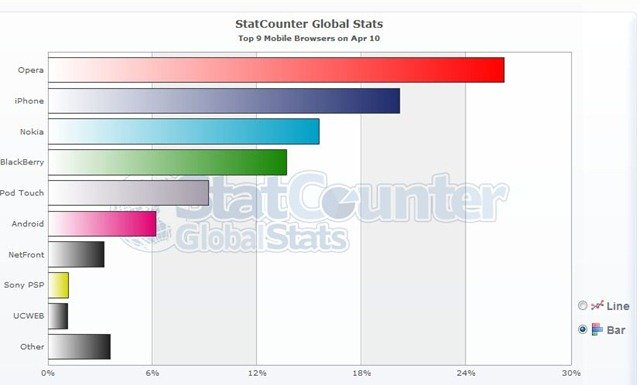 Second up, iPhone. Strangely, iPod Touch is at a different position separately, even though it has the same Mobile Safari browser as its full-featured elder brother, the iPhone. The iPhone has a market share of 20.16% and iPod Touch has 9.22% market share. Third is Nokia at 15.33% which is just sad as it still has the most number of handsets out there in the world. BlackBerry is at 13.67%. And then comes Android, at number 6, at 6.17%.

Now these figures can’t be proved totally accurate since these statistics are collected from websites which use StatCounter. But still, when you look at these figures globally, they do represent the shape of the mobile browser market share well enough.

For the US alone, the figures are somewhat different. BlackBerry rules, iPhone and iPod Touch follow. Android is only slightly behind iPod Touch, but almost half of where the iPhone stands. Then comes Opera, the global leader. This could change now that we have Opera Mini on the iPhone. 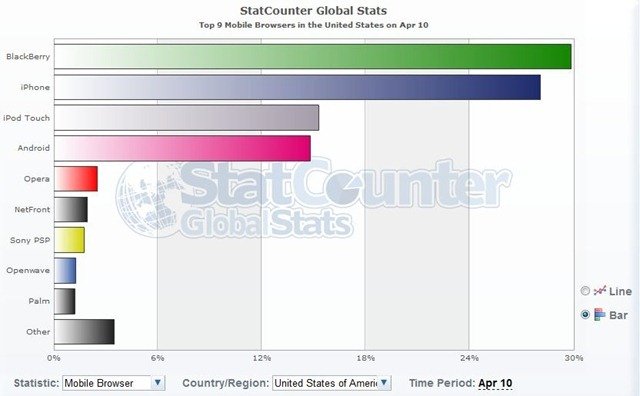 Unless you’ve been living under a rock, Android recently surpassed iPhone in market share in the US, according to TechCrunch, because AdMob claims that they get more ad impressions from Android phones than iPhones. This doesn’t actually mean that it did. Here’s why:

So you know, it seems highly unlikely that Android has passed iPhone web traffic in the US. Neither does it seem like it’s anywhere close to challenging the iPhone in the global market, despite its a huge number of handsets of all sizes and shapes. The landscape could change over time, though, but that time certainly isn’t here yet.