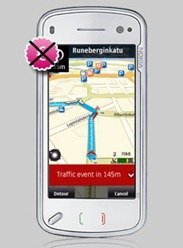 Nokia says that the new version of Ovi Maps which includes the free navigation system has been downloaded 1.4 million times since it was introduced on the 21st of January of this year.

Nokia adds that they hit 1 million just after one week of launching the update.

From next month, all Nokia GPS-Enabled smartphones will have the Ovi Maps update, preloaded with the local country map, with the navigation system and access to Lonely Planet, and Michelin travel guides. FREE.

Nokia wants a piece of the growing market of location based applications, and is looking for third party app developers to fill it up with content, new services, and more features.