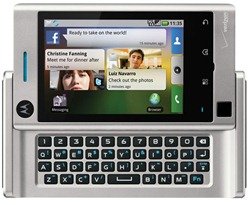 Verizon Wireless has announced the Motorola Devour just today. It will be hitting the network next month, and it will be the first VZW phone to feature “Motoblur”. It has a 3.1-inch capacitive touchscreen, a trackpad, a pre-installed 8GB microSD card, and it does include Bluetooth support.