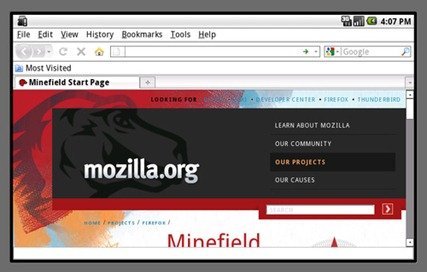 Look at the picture above. I am pretty sure you’re asking yourself: Why the hell there desktop version of Firefox is running on the Android platform? What ever happened to Fennec? But don’t have any doubts, this is fully working actually. FireFox mobile is already available for the Nokia N900, and other Maemo based devices, as well as for Windows Mobile phones.

But Android is a different story, a nifty touch interface, tabbed browsing, security, and overall better performance. Not to forget about add-ons! You’ll be able to customize your browser just like you do on your desktop! This will certainly be a game changer.

Developer Vladimir Vukićević explains the use of the full version:

You’ll note that this is the full Firefox interface, and not the Fennec/Firefox Mobile UI; we’re testing with the full interface because it’s significantly more complex than the mobile UI and stresses Gecko much more. So, if the full UI works, then Fennec should work fine as well.

He also mentions that in it’s current state, the keyboard entry doesn’t work, and it’s still not ready for use, but that Android is a good platform to work with, and the development is progressing very well.

Firefox mobile is not just an experiment, Fennec will be released sooner or later, but he doesn’t provide any estimate to when it will be available. But for now, you should know it will happen.