The popular Pizza chain, Papa John’s has released its official app for Apple TV. The app allows users of the fourth generation Apple TV to not only order pizzas from the restaurant’s menu but also to create their own by selecting toppings of their liking. The company is also offering a 25% discount on every order placed via Apple TV. 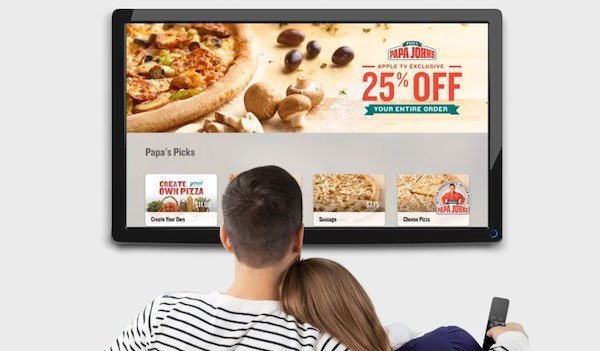 The Pizza giant aims to deliver an entirely innovative pizza ordering experience to its customers by allowing them to create, order and pay for their favorite meals from the comfort of their homes while enjoying television.

“With the launch of our Apple TV app, we’re hoping to make family movie night and friend gatherings around the TV even more enjoyable by delivering the same quality product and experience our customers expect in a convenient and interactive way.”

Although Papa John’s is not the first food chain to roll out a pizza-ordering app, it is definitely the first one to launch an Apple TV app. In its rivalry with Domino, Papa John’s has earned itself an edge by being the go to app for Pizza lovers while watching their favorite programs on Apple TV.

Search for Papa John’s in the Apple TV App Store to download the app.