iOS 5 is by far Apple’s greatest OS yet.  However, since the release of iOS 4, Apple has begun to include multitasking as a feature.  As nice as this is, it can sometimes cause your phone to start to slow down or you notice the battery is draining more than normal.  Before, you would have to hit your home button twice, hold down on one of the apps, and close each one individually.  Now, in iOS 5 we have the Notification Center, which allows us to see our important information with just a swipe down on the top bar.  Weekillbackground is a jailbreak tweak that adds a quick way to close all your apps running in the background right from the notification center. 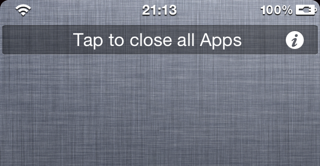 Using wekillbackground, you can close all those apps with just one push of a button.  The tweak is available for jailbreakers via Cydia, in the Big Boss repo.  The tweak requires that you are running iOS 5 as well.

There are two versions of this tweak available : the regular version is available for free while the pro version  includes features such as customization, app exclusion and more.  In the pro version, you have the option to exclude apps from being closed in the background and you can also change the appearance options of the app itself.  All these settings can be changed in the default Settings app in iOS.  Another option you have is setting it to close all apps when you open or close notification center.  This can make the process much easier, as you don’t have to press anything to close your apps.  A final option is the ability to set a timer to close apps after a certain amount of time.  Once the timer runs out, the app will close all running background apps.

The Pro version costs $.99 but may be worth it for those who want the full experience.  Either way, another great tweak from Big Boss and a must have for any jailbroken iOS 5 device.