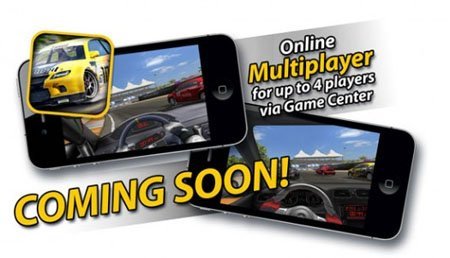 Its been only a few weeks since Game Center has been launched with iOS4.1 on iPhone and iPod touch and already a number of big names including “Real Racing” have started bringing updates to support this new feature which lets you and your friends play games together online and earn achievements on your iPhone and iPod touch.

Real Racing is without a doubt one of the best racing experiences on the App Store. A previous update of the game brought the following updates which included initial support for Game Center!

Currently it is only possible to play in multiplayer mode offline over WiFi on the iPhone and iPod touch. However, Firemint has just announced that with the upcoming update we’ll be able to play against thousands of players online in a 4-way multiplayer battle. Wow, just imagine the intense battles happening online!

The initial update will be available for the iPhone and iPod Touch but once the Game Center features get released on iOS 4.2, iPad will also get the latest update.

Another great news is, Real Racing for iPhone and iPod touch is currently on sale (40% off) selling for just $2.99 (limited time only).

Keep following us on Twitter and Facebook for more Game Center updates for you iPhone and iPod Touch!