NBC’s iconic Saturday Night Live’s Studio 8H at 30 Rock in New York City was recently replaced by Zoom, as the conferencing tool was used to remotely put together a 90-minute episode for the night. “Live from Zoom, it’s Saturday Night Live” was the official opening line used by the cast. The show was filled with Zoom punchlines, updates, and jokes.

The cast was left to figure out a way to make sure that they stay productive in quarantine. There were no props, costumes or audio-vidual effects used in the episode. The episode was mainly about a group of people in front of their webcams, thinking of one-liners. “It’s SNL — there will be some good stuff, maybe one or two stinkers,” said Tom Hanks, the show’s host, who recently recovered from coronavirus. Comedians filmed the episode from their bedrooms, featuring one or two pets. A makeshift green background was used as a visual gag. Physical props were effectively replaced by tech advancements and edits.

The show could not have accomplished what it did without collaboration and the correct use of technology. The episode poked fun at all major social apps and how they only work because millions of people use them daily. The episode criticized technology which brings us together in these circumstances as an attempt to redefine ‘normal’ reflected in our own lives around the world. 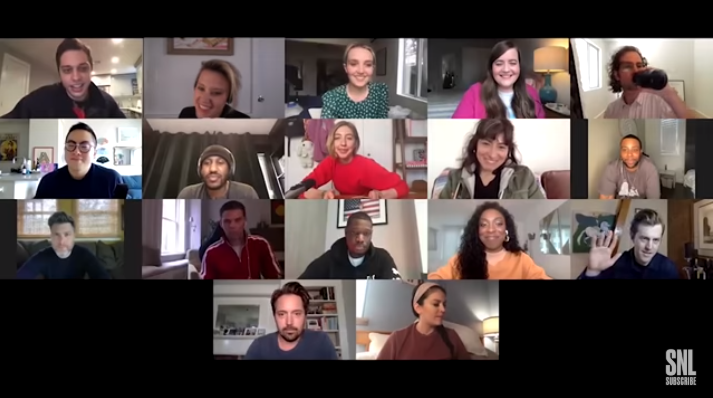 The format for the show was more in line than expected according to The Verge:

“Last night’s SNL more closely resembled TikTok than the live show fans are used to, but with even more limitations. There wasn’t any physical comedy to drive home jokes — no spit takes, exaggerated falling, or weird body contortions. Outside of a couple sketches, there weren’t even major collaborations among the comedians — a staple of Saturday Night Live— and the element that makes it a variety sketch show.”