It seems that we might be getting a surprise for this Christmas from Skype as they plan to bring video calling to the mobile platforms initially to the iOS. A new document for Skype has been discovered which, according to Engadget, describes how to make video calls on an iOS device both over WiFi and 3G. Skype team will form part of a panel called “Video Calling Gets Ready for Primetime” at CES 2011 which points to a big announcement from the company. 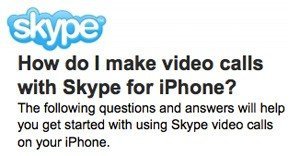 It is assumed that Skype will allow iOS users (iPhone and iPod touch) to make video calls with their desktop friends running Skype in the coming update. Many people believe that Skype provides the best video quality on desktop as compared to any other similar client. Now it’s pretty much possible that it will make its way to the mobile platforms starting with iOS in the next few days. Stay tuned!