Small Basic is a project from MSDN DevLabs aimed at kids and adults alike who are new to programming. It doesn’t scare you with a complex IDE and keeps things simple and fun. It is inspired by the original BASIC language but is based on .NET 3.5. 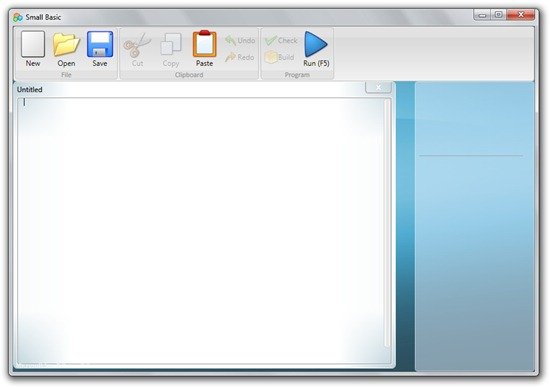 Version 1 was launched with just 14 keywords, and version 2 only adds one more keyword to the list which is ElseIf. Along with that the IDE now features auto indent like in Visual Studio. It already had the very useful Intellisense and along with auto indent, it cleans up the code nicely.

Here’s a list of the new updates available in Small Basic v 0.2. These improvements were based on feedback from the community.

At a high level, this release includes the following updates:

It has also gotten rid of the delay that was present in v 0.1 after pressing F5 to compile the code.

A must have if you’re teaching programming to your young one or even thinking of going into it for the first time. I would know since I only started programming once I reached university to do my bachelors in software engineering. It wasn’t the easiest of tasks since our teachers got us started with C# right away which in no way is a beginners language.  Having something like Small Basic to give the taste of programming to beginners is an excellent support.

If you’re trying to learn to program for the first time or trying to teach it to someone, this is a great tool to start with. You won’t be disappointed!

Make sure you have .NET 3.5 installed. Has been tested on Windows Vista and 7.