The iPad has reignited the e-book  readers war. Not only has it provided competition to the Kindle, a lot of new e-readers have started popping up. Recently, Smart Devices, a Chinese Company has announced that soon they will launch their R 7 e-book reader.

The R7 e-book reader is no way near the iPad in terms of looks, but more like Amazon’s Kindle. Kindle has more keys on it while R7 has 4 keys on it because it is expected to be a touch focused device. 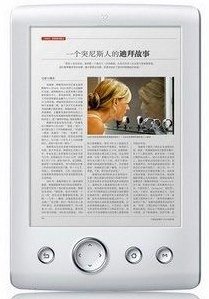 R 7 will have a color LCD display with touch screen and its size is expected to be 7 to 8 inches with a resolution of 800*600. We still don’t know much about this e-book reader but we’re sure that it will be cheaper than the iPad.